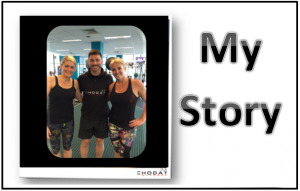 Up until a back injury in August 2013 I had been an avid runner for the past 25 years. I have competed in fun runs, triathlons and marathons, running anything from 10km to 20km a day.  Combined with this I would also swim, do weights, yoga and walk the dog, so on average i was training 2 – 3 hours a day. The back injury to my L5, S1 (bulging disk) left me with nerve damage to my left leg and I was unable to sit at all without nerve pain. I was on constant pain relief and after seeing a neurosurgeon was told I would never run again and suggested surgery on my bulging disk to help alleviate my nerve pain.  Whether I was happy, sad, stressed, injured, etc., running had always been the constant in my day

A trusted friend of mine suggested I try some PT Sessions with Chodat Fitness.  I had heard only good things about them and they certainly did not disappoint!.  I would consider myself self motivated and had always preferred to train by myself.  Reflecting back to that time, had I not been so desperate to keep training and avoid surgery I probably would never have given it a go.  I originally signed on for 10 sessions and worked with Michael.  Initially my focus was around keeping my current fitness, and to build the strength in the surrounding muscles in my back to help alleviate my back pain.  No two sessions were ever the same.  I was constantly challenged and reaching new goals without even realizing.  After the initial 10 sessions I signed up for 5 more and worked with Michael to slowly introduce running again.  Michael also created programs for me to train by myself.  At 42 years old, I was certainly not expecting miracles as I felt I was past reaching any new personal goals.  After 15 sessions I could not believe the difference – I had increased my cardio fitness without any running at all.  I lost body fat, increased muscle mass and found I was generally being able to sit for longer periods of time.

I now train with Lukas in a 2 on 1 session once a week with my girlfriend Lynda.  I find Lukas gets that little bit extra from me that I just can’t achieve myself.  Lukas takes into consideration both our limitations and creates a session for both of us that keeps us challenged.  When I originally started I would write down each training session so I could use them in the gym on my own.  I now have a wealth of knowledge and the confidence to go into any gym and put together an hour workout that challenges me every time.  I now train 6 days a week – for 1 hour a day mostly in the gym and all from workouts Lukas and Michael have given me in the past. I occasionally go for a run however,  I now don’t feel the need so much.  The most surprising part for me has been the length of time I train for.  I can achieve better results from a 1 hour training session with Lucas and have loads more energy than I ever used to.  Thanks Chodat fitness – you have changed my world!!

This error message is only visible to WordPress admins

Please go to the Instagram Feed settings page to create a feed.